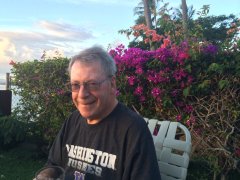 A former president of Intalco died peacefully Sept 9, 2022 at Hospice House in Bellingham.

Peter Aylen was 87 and died following years of dealing with Parkinson’s disease.

Peter came to Intalco in 1967 and started as a cast house engineer.

Peter was born in Trail, BC and moved to Kelowna at age 13 following the death of his father. He graduated from Kelowna High School in 1953 and went on to do both his Bachelors and Masters degrees in Metallurgical Engineering at the University of British Columbia. While he was supposed to be writing his Masters thesis, he started dating a student nurse named Valerie Lyttle at the Vancouver General Hospital. When he was finished his degree he went to work in France and the student nurse continued her RN training in Vancouver. When she was finished, 18 months later in March 1964, they got married in the American Cathedral in Paris and the British Embassy. (The French don’t care if you have a church wedding but you must have a civil ceremony.) In order for work for a French Company, Peter had taken 10 weeks of audio visual French down in the Alps.

After their marriage, Peter and Valerie were able to visit many parts of France and other countries in Europe while he was doing trials in many foundries working for Pechiney, a former owner of Intalco.

After a year in Paris, Peter and Valerie moved to Montreal where Peter worked for Canadian Liquid Air and Valerie worked in the Royal Victoria Hospital. They enjoyed living in downtown Montreal where Peter could actually walk to the Forum, which at the time was the home to the Montreal Canadiens. People knowing Peter will realize what a bonus that was for him. After that year, the couple moved to Burlington, Ontario where Peter worked in Hamilton, Ont as the regional engineer for Ontario for Canadian Liquid Air. A year later, Peter found out there was an aluminum plant in Ferndale that was trying to hire metallurgical engineers from the big eastern schools and were being told they didn’t want to go to “the bush”. Big Mistake. So Intalco started to hire in Canada. In those days this was known as the “brain drain”. Many engineers and doctors moved south in the 60s.

In 1968, they moved to Bellingham and lived there 5 years until Intalco sent them to France to live down in the Alps where Peter worked for Pechiney again at St. Jean de Maurienne Valley one valley over from Val D’Isere and half an hour from Italy. After 6 months, Intalco moved them back to The Pacific Northwest where Peter once again worked in administration at Intalco. In 1981, Alum - a parent of Intalco - sent Peter to Maryland to be the plant manager of Eastalco - Intalco’s sister plant. They were there for 4 years and once again moved back to Bellingham.

Around this time Peter was the President of both Intalco and Eastalco and so flew back and forth between the two while his wife coped with a teenager in high school reacting to being moved across the country in the middle of high school.

In the early nineties, Peter became a Vice President of Alumax and began traveling all over including doing a feasibility study for the State Dept on Russian aluminum plants. Then he was sent to Quebec to direct the building of a new aluminum plant which he named Lauralco after his daughter. Three years later he was back in Bellingham and retired in the late nineties soon after Alcoa bought Alumax.

He spent a lot of time negotiating for power contracts for several aluminum plants so was very interested in the current effort of Intalco to get a power contract.

Peter is survived by his wife of 58 years, Valerie, and his daughter Elise Lauren and her husband, Don Cranshaw of Kirkland, WA, and Lummi Island, and his son Curt and his wife Coleen Erickson of Bellingham and their children - the adored grandchildren of Peter and Valerie - Kaia Grace Aylen (now in college in California) and Cole Jacob Aylen (currently at Sehome High School.

Peter requested a Celebration of Life at his summer place on Lummi Island. The time for that will be announced later. Friends so wishing to make a Memorial Donation are invited to consider Whatcom Hospice House c/o Whatcom Hospice Foundation, 2901 Squalicum Parkway, Bellingham, WA. 98225