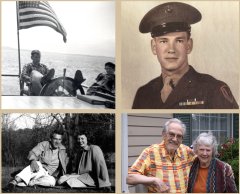 Rex Lloyd Heberden died at the age of 99, on 7 December 2022, of natural causes.  Born on 1 December 1923, he was the son of Charles and Helen Heberden of Bellingham, Washington. He grew up in Whatcom County, where he developed his lifelong love of outdoor activities, whether hiking, camping, hunting, skiing, fishing or sailing. He graduated from Bellingham High School, with an aptitude for mathematics. Summers, he worked for the US Forest Service as a fire spotter and fighter. Barely a year into his first year of university, he enlisted with the USMC in 1942. He went on to fight in the Fleet Marine Force in the Pacific as an acting sergeant on Iwo Jima in A Company, First Battalion, 28th Marines, Fifth Marine Division, receiving a purple heart. After rehabilitation, he enrolled for studies at Washington State College in Pullman, eventually earning his degree in architectural engineering. While in Pullman he met Janice Eileen Samuelson, daughter of Axel and Alice Samuelson of Pullman, and they married on 19 May 1951.
For the next 25 years, he worked as a project architect for many prominent architectural companies in the Northwest, with a wide range of assignments. His mathematic and engineering skills soon propelled him into the area of earthquake engineering, and among his proudest achievements was to have been part of the engineering design team on Seattle’s first true skyscraper, the 50 story Seafirst Building (now Safeco Plaza) which opened in 1969. At the peak of the economic turbulence in the 1970s, where he was being asked increasingly to take on projects as far away as Hawaii, and even Hong Kong or Singapore, he preferred to maintain a stable family life in the Puget Sound region, and took on a new career path within the bridges and highways division of the Washington State Department of Transportation, where he would work up until his retirement.
In his younger years, Rex was an active outdoorsman, sharing those activities with his family. He was an avid skier, and was a proficient bowler. As the years went by, he developed an interest for painting, mainly in water colors, and attended several retreats in the Southwest and eastern Canada, and his paintings adorn many of the walls of family homes. In quiet moments, he was a great reader and played the piano. Having learned the skills of masonry and carpentry when he was young, he took on several major home improvement projects for the family.
A strong believer in education, the continuing development of the mind and a sense of civic responsibility, he was active in a variety of social roles. He was a Master Mason and a 32nd Degree Scottish Rite Mason, as were his father and grandfather, and participated in scouting activities.
He is survived by his wife of 71 years, Janice Samuelson Heberden (born 1928), of Bellingham WA, his children: Arlene Marie (1953) of Piedmont SD, Marc Lloyd (1956) of Paris, France (wife, Christine Suzanne Seillan of Mont-de-Marsan, France), and Kenneth Wayne (1959) of Bellingham WA – as well as three grandchildren: Maurine Elvina Heberden (1992) of Paris, France; Joyce Eileen Heberden (1994) of Liverpool, England; and Clifford Georges Lloyd Heberden (2000) of Seattle WA. Deeply beloved by his family, he is remembered as a man who as a father was both a teacher and a role model, who in all circumstances sought to do the right thing for his family and others and was admired by those who knew him for his plain dealing, honesty, hard work, and pride in family.
Donations may be made in his name to the Whatcom County Humane Society.