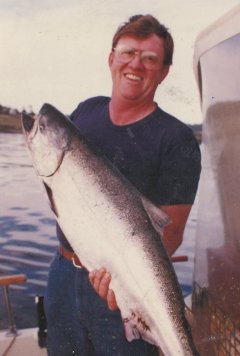 Richard was born in Tacoma April 14th, 1945 to Henry C. Womack and Mary F. (Snyder) Womack and had lived in Washington, Nebraska, California, and Nevada. He graduated from Pasadena H.S., in California in 1963 and moved to Nevada to work in a surface mine in Gabbs. He then joined the Air Force and was a Lifeguard stateside - Apparently, the longer he held his breath the more leave he got! He became an MP and was sent to the Philippines during the Vietnam War. In 1967 he returned from the Air Force and reunited with his family in Bellingham. He went to work as a mill worker at Georgia Pacific, Bellingham.

It was there he met the love of his life, Dorothy Romberg - they married December 7th, 1968. He co-owned and operated A&B Carbide on State Street with his step-father, Jack. Rick landed a Boilermaker position at the Mobil Oil's Ferndale Refinery in 1977. He retired to travel and enjoy life in February 2007. Rick enjoyed fishing, golfing, bowling, playing his guitar, and spending time with his family and friends. He was known to his family as devoted and passionate, loving and caring and he will be remembered and greatly missed.

He is survived by his wife Dorothy, his sister Judith Vera of Belllingham and brother David (Janice) Womack of Salem, OR. His 2 children April (Blair) Walker and Meredith (Colin) Koehler, as well as his 4 Grandchildren and 2 Great grandchildren - Cassi Walker & Kimberly (Dustin) van Dommelen, Corwin & Violet, Parker & Peyton. His nephews, Joseph and Michael Vera. He was preceded in death by his parents and step-parents, Mary (Albert 'Jack') Jackson and Henry (Ina) Womack.

Please join us in celebrating Rick from 1-3pm on March 2nd at the Tillicum House at Pioneer Park in Ferndale, WA.

In lieu of flowers, memorial donations may be made to the Alzheimer's Society of Washington www.alzsociety.org

Dear Dorothy and family; So very sorry to hear about Richard.  I always enjoyed talking to him.  He will be missed, thinking of all of you during this time.  Hugs!  Swanny

I am his nephew but more like a son. I was adpoted by him and Dorothy at the age of 6 until my early teen years. They taught me life lessons that I still cary with me today. He was the father in my life. I am grateful and will miss him dearly.