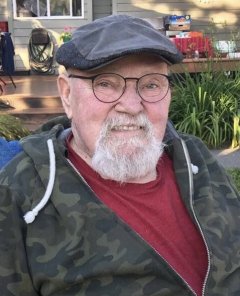 Robert (Bob) Stanley Dawson Bailey, fondly known to many as Papa, passed peacefully in his home, surrounded by his family, in Bellingham, Washington on Wednesday, September 23rd at 81 years old.  Bob was born in Hereford, Texas to Fred and Jewell Bailey on September 19, 1939. He graduated from Paschal High School in Fort Worth, Texas. He was married to Helen Beth and raised their three children, John Robert, Karen Elizabeth, and Fred Allan in Crowley, Texas. While raising his family, he worked various jobs, including owning and operating an auto repair shop for import motors, such as Porsches and Jaguars, and an oil well service company, Gearhart-Owen Industries.  In 1985, he relocated to Bellingham, Washington to start a new life with his future wife, Mary Kay and her two children, Terri and Ken. They were married on October 12, 1985 on the beach at Larrabee State Park. Bob was a man of many talents. He started his career in Bellingham, at Bayco Construction, spent several summers fishing in Alaska, built boats at Growler Boat Works, and eventually owned his own business, Bailey Building Maintenance, where he contracted small remodels and repairs.  Bob was an extremely creative, talented, and inventive man. He was dubbed by many who knew him as “The Renaissance Man” for his constant abilities to turn recycled items into gorgeous artwork, landscaping, and building projects. Bob spent his time dreaming of his next creation, which often included his love of cars, wood carving, gardening (especially weeding), and inventive construction. Many know this to be true by looking at his home, where he built rockery out of broken concrete, a greenhouse out of recycled glass, a garden shed from recycled materials from Bunk’s Drive-In, a mosaic side yard made out of the brick from Railroad Avenue, and so much more. Bob also had a deep love and appreciation for nature. So much so, that he and Mary Kay lived out their dream at their remote cabin in Penny, B.C. on 100 acres of an old lumber mill town. It was their summer escape for 30+ years, with no running water or electricity, a wood stove, endless friendships made with their neighbors, and precious memories with their family. Bob will forever be remembered as one of the kindest men on Earth for his warm smile with a twinkle in his eye, his sense of humor, his slow Texas drawl, and his infamous, “Yes ma’am.” He will be greatly missed.  Bob is preceded in death by his parents Fred and Jewell Bailey, sister, Bonnie Vandergriff, and son, John Robert Bailey. He is survived by the love of his life, Mary Kay Bailey, his children, Karen (Doug) Sheldon, Fred Allan Bailey, Terri (Mike) Brown, Ken (Stacy) Asp, daughter-in-law Carol Bailey, sister, Alma Dell Honea, grandchildren Josh Bailey, Kody Asp, Hayden Brown, Rylie Brown, Kennedy Asp, and his precious pup, Sophie. A private memorial will be held with family later in the year.  In lieu of flowers, please consider donating to Whatcom Hospice Foundation.

You will be missed more than you know Bob.....

Bob was truly an American craftsman, not only with his tools but his mind. He was constantly studying new things, local history. More importantly he studied and loved his whole family. Excepting as a gem and individual to be loved and cherised. I was glad to know him and visit with him.

The day I met Bob was the day we did the final negotiation for purchase of the house next to Bob and Mary Kay in 2008.  After signing papers, I came out to find a gentleman down on his knees weeding in the flowers in the front yard.  He looked up, introduced himself, and said something that the flowerbed looked like it needed a little help.  To be more accurate, he said in his wonderful Texas accent, the flowerbed needed a little "Hep."  I learned nobody had asked him to weed the yard next door.  He just took it on himself as a good neighbor.  At that point, he had no idea who his new neighbor was or might be.  He just seized the opportunity to do a good deed for a neighbor.

Over the years since then, Bob has always been the best neighbor a person could have.  At one point, I thought I was going to have to sell our house.  I considered Bob and Mary Kay being such good neighbors they added value to all neighborhood homes.  A description of Bob's attributes as a neighbor for someone who is inclined to work on house projects themselves includes:  1) Bob owned every tool ever made by mankind.  2) He was quick to offer the loan of his tools.  3)  A tool loan from Bob always included the offer, "Can I hep you with that?"   Over the years, I learned, it did not matter to Bob, who was moving into the house next door because for Bob, everyone was his neighbor.  Someone could just be passing by, but if they need a hand with something, Bob would do what he could to hep that unknown neighbor.

I trust you love your new neighbors and neighborhood.  I am confident that your new workshop has every tool you left behind and more.  I can only imagine that in your shop there are new tools you are learning to use; tools reserved only for those who have mastered the skills of goodness in this lifetime.  Thank you so much Bob for all you have shared in this earthly neighborhood.

I'm so sorry to see of Bob's passing Mary Kay. I remember him coming into the office with his one of a kind voice. He was always so kind and joyful to be around. Your eyes would light up and I think you even were giddy with excitement when he came in. I'm wishing you and your family comfort and peace.

Bob was a very, friendly, caring and supportive man.  I met Bob and Mary Kay in the small town of Penny, B.C. approximately two hours East of Prince George, B.C.  They would often come over to my Aunty Lelia's house for a Social, having great conversations, laughs,  played several games of Chicken Foot (Domino's Game) or needed some help.    I will always cherish those great times and memories we had out there.  He had a great smile.  Take care Mary Kay and family, my condolenses.

Mary Kay an wonderful family, you are in our thoughts and hearts. Bob was a joy to be around; already miss his greeting "good morning sunshine" when he drove me to work back in the Consultants in Medicine days. Sending our love to all of you.

To Know Bob was to love him, his gentle soul rest.