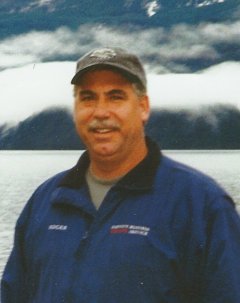 Roger was born on August 23, 1959 in Oakland, California to Edward and Simone August.
Roger was an exceptional baseball player in his youth and won many awards. He also played football, enjoyed other sports and had a passion for performance cars. He graduated from Harbor High School in Santa Cruz, CA. Roger lived in Bellingham for over 30 years and worked for Alpha Technologies for the past 17 years. He was the first employee to receive the "Employee of the Year" award. Fishing was Roger's passion and he loved the outdoors. He was previously a member of the Whatcom County Search & Rescue. Roger was kind, humble, and generous and will be greatly missed by family and friends.

In lieu of flowers, memorials may be made to Whatcom Hospice House. At his request, no funeral services will be held.

I'm so sorry for your loss. I remember when ,Roger was a little boy. I wished we could have spent more time together as cousins. My condolences, Gail Mckeever

Our sympathy to the August family.  Roger was a great guy--we always enjoyed him. Loved his laugh!  Looking at the pictures made us realize just how much he looked like his Dad.  Keep all the good memories in your mind and heart.  He will be missed.  Thinking of you!  David & Verna Thomas

So sorry for your loss

I met Roger about 15 years ago , when I started to work at Alpha and I alwyas liked him a lot, because he was such a likeable person. I'm deeply saddened that he had to leave us so early. He will be greatly missed, not just by me, I know by many of our co workers. He was a great guy <3

I am sorry for the loss of Roger.Havent seen him in years.I remember the times when younger in Pismo beach and Santa Cruz.My family condolences.Rest in peace cousin.

Sending hugs and prayers to the August Family.

Roger was a great guy and all his classmates loved him.   Harbor High Alumni Class of 78

It is with a heavy heart that I learned of Roger's passing.  Rog (Awg Dawg) was my best friend from the time we were little through junior high and remained good friends through high school.  We shared every adventure two kids in Scotts Valley could dream up and I can still see and hear him like it was yesterday.  I can also still see his kind and gentle mom and hear his dad's booming voice which scared friends into going back outside.  Good experiences and good memories that helped shape who I am today.  I will always remember Roger and be grateful for his friendship and the times we spent together.  They were the best.  RIP old friend.

So sorry to hear we lost the Auggie Dog.  Was looking forward to looking him up once retired and wetting a line with him.  Lot's of good memories catching this chucker, lots of good memories joking and laughing in the dugouts.  God Speed chuck, get lots of limits, friend.

Sad news.  Our sympathies to the August family.  Roger was a great high school baseball teammate.