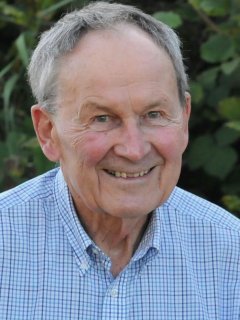 After a six month bout with cancer, and surrounded by family, Ronald Charles Higginbotham went to be with his Lord and Savior Jesus Christ on November 3, 2022. Ron was born to Mary Sabilla Schultz Higginbotham and Robert Corbett Higginbotham on April 23, 1936 in Greenport, Long Island, New York. His only sibling, Richard, was born 2 years later. They made a great team.
Eventually the family moved to the South and Ron grew up primarily in Atlanta, Georgia where he graduated from Northside High School. He received a 5-year full football scholarship from Auburn University, but after 3 years, he transferred and graduated from Georgia Tech University. His job with Coca-Cola took him throughout the United States and he fell in love with the Pacific Northwest. With the intent to work for the US Forest Service in the PNW, Ron enrolled at the University of Georgia Forestry School and received a BS in Forestry. During this time, he met the love of his life, Emily Hitchcock, and they married Dec. 21, 1963.

After graduation, Ron accepted a job with the Forest Service in Montana. While working there, and being very active from a young age in his Christian faith, Ron and Emily were called by God to become missionaries. They moved back to the South, where Ron attended Columbia Bible College (now Columbia International University) in Columbia, S.C. The day before his first exam, Emily had their first child, Timothy David Higginbotham. And two years later, while raising their support team for North American Indigenous Ministries (NAIM) Rachel Virginia Higginbotham was born. In 1970, with two very small children, Ron and Emily left the South for the final time and landed - as immigrants - in British Columbia, Canada.

They served with NAIM for 29 years, retiring to Bellingham in 1999. There, Ron began his “next career” as “head cheerleader” for the women’s and men’s soccer teams for Western Washington University. He loved getting people to run the WWU flag after each goal, leading the crowd in singing, “Ole, Ole”, and encouraging those around him to join him in a plethora of personally created chants.

Ron loved spending time with his six grandchildren: Brooke, Jordan, and Madison Higginbotham and Pavitra, Christian, and Scout Fletcher. They were a source of great joy. In addition, only five days before he went to heaven, Ron was able to meet his first great-grandchild, Isla Jade. Meeting her was his “final goal” and their one and only time together was incredibly sweet.

Ron was a great encourager, humble and kind. He was also an engaging story teller. He had many adventures over his lifetime, some which were truly unbelievable - an unexpected journey over a waterfall in a canoe, a helicopter ride on the outside of the helicopter, and a close encounter with a tree on fire falling across his sleeping bag (Providentially, the heat of the fire woke him up and he had gotten out of his sleeping bag just before the tree fell.  Then he had to stand behind another tree and count the rifle shells that were going off.).

In his retirement he became an avid bicycle rider and he could be seen riding all over Whatcom county. And one summer, Ron and his friend Jim Wilson decided to brave the twisty roads of the Oregon Coast on two wheels - four if you count both bikes.

Ron is survived by his wife of nearly 59 years, Emily. He was so proud of his son Timothy Higginbotham and daughter-in-law Lana, his daughter Rachel Fletcher and son-in-law Matt and will be greatly missed by his wonderful grandchildren, and great-granddaughter. He also leaves behind his brother-in-law and sister-in-law Phinny and Jan Hitchcock, as well as many nieces and nephews, most of whom live in his beloved South.

He was predeceased by his parents, his brother Richard and his wife Betty, his nephew Mark, his sister-in-law and brother-in-law Knox and Ginger Chamblin, as well as all of his aunts and uncles.

We wish to thank his caregivers, Chance and Sherene, and his hospice nurse Jamie, who were all so kind and helpful.