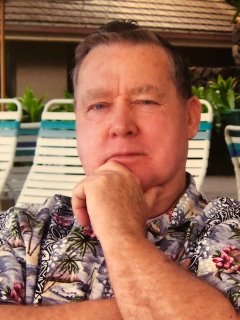 Trevor Haslam, 83, of Blaine, WA passed away November 22, 2019. Trevor was born on October 22, 1936, in Little Hulton, England to James and Edith (Rowley) Haslam. His family, including his two brothers Eric and Graham, emigrated from England to Seattle in 1948.

As a young man, Trevor worked various jobs including at the railroad with his father and then later as a Building and Maintenance Mechanic with United Airlines. Trevor truly enjoyed his work with United and loved the people there he worked with. He was never short of stories from the good old days. When he was laid off, he never stayed unemployed for long and stayed busy working other jobs including a position he held for many years at Pioneer Square Properties until he was ultimately recalled. For awhile, he held down both positions, working nights at United. He retired in 1998 after 31 years.

Trevor was a loving husband to Pauline, devoted father to John and Elizabeth and Grandad to Stuart, Hilary, Jack, Olivia and Gillian. He loved his grandchildren more than anything. He offered his time and many skills volunteering at the children’s school and was always a friend willing to help with projects.

Trevor was skilled at wood-working, drawing and could fix just about anything. He loved to travel and took advantage of working for an airline, traveling back home to England most years with the family. He enjoyed traveling extensively with Pauline until her death in 2012.

Trevor will be remembered for his warmth and willingness to always lend a hand and his love for his family.

I have very fond memories of Trevor and his model train world he created in his basement.  As a young lad I would spend hours taking in the details of this enchanted land.  I also remember spending many hours in Trevor and Pauline's front room gazing at and daydreaming about thier armory they had on display.  Trevor always had a way of making me smile and could turn a humdrum day into a fantastic experience.

Uncle Trevor, you will be missed!

I worked with Trevor at Pioneer Square Properties and have such wonderful memories of him.  He was a jack of all trades and could fix anything and he was a kind and thoughtful man.  He also possessed a rollicking sense of humor and could find something to laugh about in just about any situation.  I enjoyed working with him and thought of him often through the years.  My sincere condolences to the family.

Rose, I'm so glad to see you learned of my Dad's passing. He always remembered his time at PSP fondly and especially of working with you. (I do, too!)  ~Elizabeth