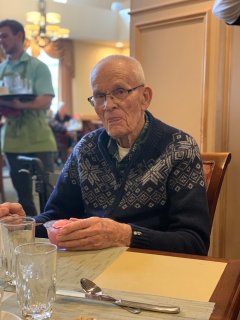 Born:
Saturday, December 29, 1923
Died:
Friday, January 31, 2020
Birthplace:
Los Angeles, California
Service Information:
Everyone is invited to a celebration of his life which will be held on March 1st at 1pm at the Maltby Community Center (8711 206th St SE Snohomish, WA).
Master Chief Bill Pepperell, 96 of Maltby WA, passed away of natural causes on January 31, 2020 in Bellingham, WA surrounded by loving family. Bill was born 12/29/1923 in California to William and Eleanor (Nelson) Pepperell.  Their family settled on their homestead farm in Maltby, WA in 1928. Bill was an all-star athlete at Snohomish High School where he lettered in every sport.  “You need to get really mad at that first hurdle and the rest are easy.”  Bill graduated in 1942 from Snohomish HS.  Bill was a Boy Scout, loved hiking in the Cascade Mountains, enjoyed pheasant hunting in Eastern WA with his dad and their dogs, and was an avid fisherman. World War II had begun, and Bill wanted to serve his country, so he enlisted in the U.S. Navy and became a Hospital Corpsman.  He was a medic in WWII (USS Bolivar), Iwo Jima and the Korean Conflict.  He was a young man stitching up other young men and provided healthcare to countless natives that often didn’t have modern medical care.   After the war, he continued with his career in the U.S. Navy and rose to the rank of Master Chief.   He taught field medicine classes at Purdue University and was well respected by his peers.  Bill retired with a career in the U.S. Navy after 22 years of service, 1943-1965. Bill began a career at the University of Washington, University Hospital as Manager of Central Services in 1966.  He created policies for equipment sterilization and was known to be a great manager.  Bill met his wife Susanna there, she was a secretary in the Human Resource Dept, and it was love at first sight.  Their marriage of 52 years created a very close-knit family with three daughters: Sandi (Colin) McMillan, Debbie (Robert) Hughes and Tami (Jason) Bowman.  Bill retired from the UW with over 20 years of service. Bill had a long retirement of over 30 years, almost entirely on his family farm in Maltby, WA where he and his wife raised vegetables, honey bees, grass hay and beef cattle.  His vegetable gardening included growing thousands of his famous garlic that he gave away to family and friends.  He enjoyed many fishing trips on the Puget Sound in his boat with family.  He and his wife moved from his farm to Mt. Vernon, WA when Bill was 93 years old to “slow down”. Bill spent his life always reading and learning.  He had a great sense of humor, played pranks on his wife and daughters, often was singing in Spanish and making funny animal sounds to entertain grandkids.  He enjoyed community and was an active member of Horseshoe Grange, he was a Shriner, he was a Mason for over 65 yrs, active in the Everett Steelhead Fish club and supported Snohomish County 4-H.   Bill’s amazing legacy lives on with his wife, daughters and their husbands, and ten grandchildren: Hannah, Nathan, Mackenzie, Gabriel, Owen, Madison, Andrew, Thomas, Liam and Maxwell.  Bill had numerous friends that remember him.   Everyone is invited to a celebration of his life which will be held on March 1st at 1pm at the Maltby Community Center (8711 206th St SE Snohomish, WA).  Immediate family will bury Bill in a private ceremony with full military honors at Tahoma National Cemetery.   We are grateful to Highgate Senior Living in Bellingham, WA and Whatcom Hospice for taking exceptional care of our dad.  In lieu of flowers, memorials can be made to:  Shriner’s Children Hospital and Whatcom Hospice.

I only knew Bill for a short time as a neighbor after his move to Mt  Vernon but I treasure his memory! He and Suzie were wonderful neighbors and I was a recipient of some of his wonderful garlic Meeting some of his family only increased my admiration for this kind and generous man. I miss him !

Thank you for your kind words!  I'm continuing dad's garlic in my garden!  We miss him dearly.